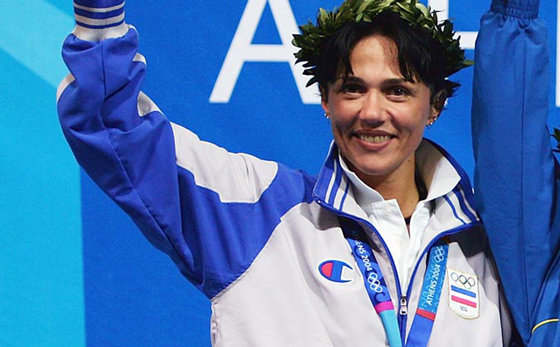 Jasna Šekarić (Serbian Cyrillic: Jasna Šekarić, née Brajković / Brajković; born December 17, 1965 in Belgrade, SR Serbia, SFR Yugoslavia) is a Serbian sport shooter. She has won a total of five Olympic medals: one gold, three silvers and one bronze.[1] She has also won three World Championship gold medals in the 10 m air pistol. In 1992, she lost the Olympic gold medal to Marina Logvinenko despite having the same score. She is one of only six shooters (by 2012) to compete in at least seven Olympic Games.

She grew up in Osijek, Croatia, where she began to practice shooting. In the school competitions, she first competed with a rifle and achieved a decent place at the regional championships. She later began to use a gun. In 1990 she returned to Belgrade, where she had a successful year in sports at a private level. She is married and has two children, Lea (Lea) and Luka (Luka).

She was named several times was the best sportswoman and shooter in the SFR Yugoslavia, Croatia, FRY, Serbia and Montenegro and Serbia. In 1988 and 1994 she received a Golden Badge of the Sport award for Yugoslavia’s best athlete.

In the 2008 games, she was the country’s flag bearer at the opening ceremonies. Jasna is listed in the golden book of sport shooting as the only shooter participating at five Olympic Games while being a finalist in all five.

Despite never having changed nationality, Šekarić has competed under four flags at her six Olympics. She competed for Yugoslavia at the 1988 Olympics. In 1992, since Yugoslavia was under UN sanctions, she (and fifty other Serbians, Montenegrins, and Macedonians) competed as Independent Olympic Participants. Her next three Olympics were under the flag of Serbia and Montenegro and she finally competed for Serbia in 2008 ans 2012.

She qualified for 2016 Olympic games in Rio de Janerio!